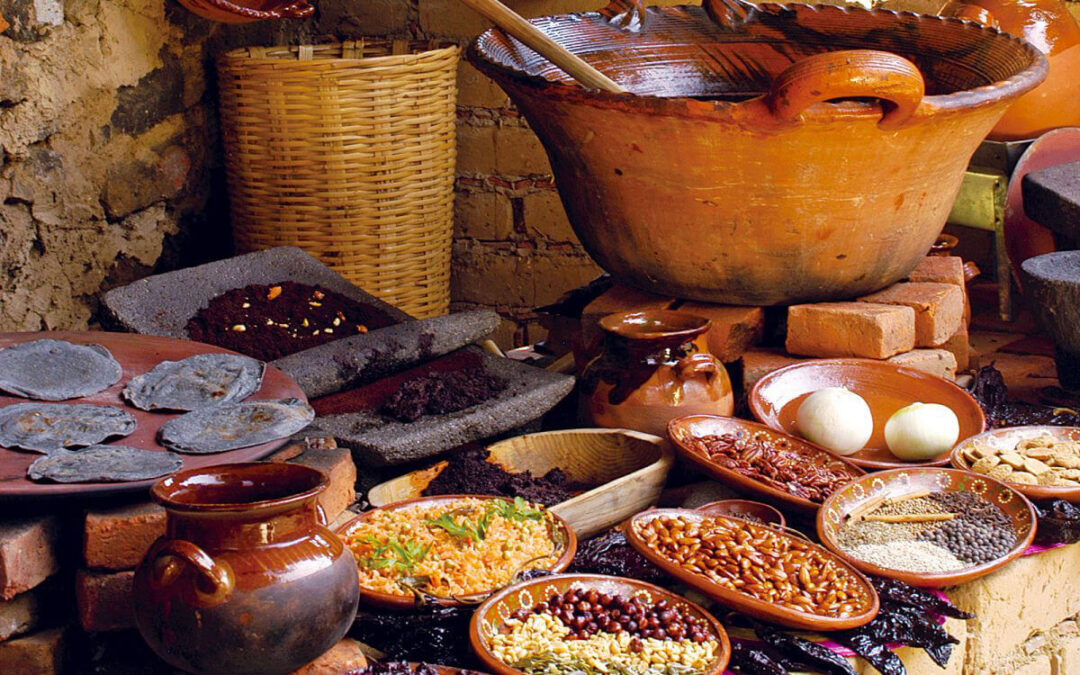 Oaxaca isn’t just some place to enjoy all of its natural environments, beaches, little towns, customs and traditions, it is also a place with a huge variety of Mexican cuisine dishes, besides being one of the most delicious of all country. That’s why we introduce to you a small list with some of the dishes from this region. It doesn’t matter where you are staying inside this state, you can always find some of these gorgeous things from Mexican cuisine at a very low cost.

Like people say in mexico: “Oaxaca is the center of all MOLES” and even though villagers say there’s more than that 7 moles, we just have these seven for starters, enthusiasts and touristc purposes. The most common are: black, red, yellow, coloradito, Green, Chichilo and chiken stew with olives.  The most famous and complex in no question, the black one, cause it has more than 34 ingredients, including six different types of chili pepper.

Red Mole is the hottest, although this preparation is almost identical to black one, chili from this dish is not fully toast to get that particular red color. The yellow one get this color due to chilhuacle chili. Whilst the green one has slices of green tomato and a couple on onions to add flavor, all of these moles have their own distinctive flavor, especially when you mix it with chicken, turkey or beef.

he Tlayudas are basically a much bigger tortilla, with a leathery texture and almost toasted, which gave this dish a more consistent form, since this tlayuda stays longer in the comal that the usual and smaller tortilla. The villagers eat this with Oaxaca’s cheese, chopped cabbage, casserole and a chili sauce made in molcajete. Simply delicious!

Tasajo is the beef cut into thin strips that are salted and hung to dry for several days. This method in which meat slowly dehydrates while retaining all its flavor, is practiced in various parts of the world, and the people from Oaxaca are one of the best on the matter.

It is common to see the Tasajo seller points in downtown all over the state, where you can buy Tlayudas with radishes, waterchili, chapulines (small crickets with chili), Oaxaca’s cheese and little onions, as well as another local delicacies as toppings, depending the region.

It is a broth of pre-hispanic origin, prepared with water, tomato slices, green chili, sliced ​​onion, crushed garlic and hierba santa. All the ingredients go inside a big pot were two red hot rocks lay in the middle to boil the water. This soup also has pieces of fish and / or shrimp. The final flavor is just delicious!

This list wouldn’t be complete without the classic Tamal Oaxaqueño, that’s made of corn dough and banana sheet, that the main difference among other tamales. There’s a lot of flavors, like Chicatanas, Hoja santa or sweet tamal with jam. The only limit here is your appetite and your taste.

Previously the inhabitants of cities of southern Spain besieged by the enemy armies, invented a thick soup prepared with vegetables, grated cheese and eggs, to eat something substantial in the winter, they did not put meat on it because they had to preserve the few animals that were there.

Oaxaca’s version of this is Cat’s broth is not as humble as the Spanish soup, cause this has a little meat (not from cat). It is prepared with beef, spinach, chickpeas, chopped green beans, chayote, carrot and pasilla pepper, among the most important ingredients.

The Mixtec and Zapotec Indians invented tejate during pre-Columbian times to worship their deities in their ceremonies, which is why it is called ” the drink of the Gods”

This drink is prepared by making a paste with roasted cornmeal, fermented cocoa, cocoa flower and mamey seed. This paste is mixed with very cold water and sweetened to drink.

And last but not least, the chocolate! It is prepared with almond, cinnamon and cocoa. Before grinding the cocoa, it is essential to place a candle under the metate to preheat the stone, so that the cocoa is ground and melted at the same time.

It’s presentation can be in small circles or chocolate tablets. Both can be prepared and served with warm water or milk in little clay jugs. Some say that a cup of hot chocolate at first time in the morning is enough for breakfast and transit for half a day off work without fainting. Apart from delicious, chocolate is highly energetic and absolutely delicious!

No comments to show.