The Joy of Oaxacan Calendas 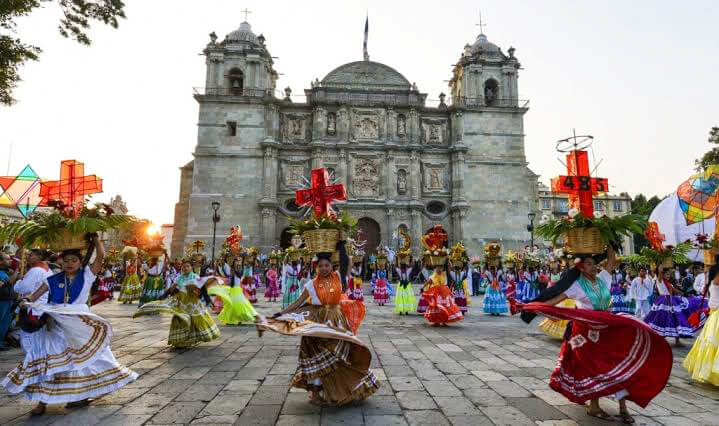 Calendas are, and have always been, for many Oaxacans a party, the time to throw the house through the window; the time to open ourselves and our fellow men; to enjoy after a long time of hard work; of leaving aside the secrecy and breaking the routine; to show the Patron Saint how important it is in the community; and even the time to ask for a favor through a Manda. Laughter, dance and joy are lived in a Calenda, but you know what’s its origin or where it came from?

The mythology of the word calenda, comes from the name “kal” that means to resonate, from the Latin “calare” that means to summon and from the Greek “kalein” whose translation is to call.

According to the chronicler Jorge Bueno Sánchez, these celebrations are a preamble of  celebrations from the Temples of the City and of the patronal churches of thier  towns and tries to be a convocation, a living prediction and a reason for popular rejoicing.

European Origins of the Calenda

Sanchez, details that the origin of the Calenda is linked to the Dominican missionaries of the sixteenth century. “Oaxaca was evangelized by Dominican friars, attentive to their apostolic mission took advantage of the experiences of the evangelization of Europe to solve the problem of Christianization of a territory densely populated by indigenous people”, he adds.

He also indicates that the friars formed huge spheres of reed, lined with blanket where religious mysteries related to the feast to be celebrated were painted. These spheres that the people knew by “marmots” had lit candles inside so that, at nightfall, they simulated stars and colorful balloons.

The marmots, living proof of the doctrine, left the neighborhood in the afternoon, roamed the streets of the City or the town and at midnight they were delivered to the parish church accompanied by the crowd of the people carrying candles, lanterns, flowers and reeds adorned with paper flags.

Sanchez’s writings assure that in the middle of the 18th century (1741 approx.), the so-called Mr. Tomás Montaño y Aarón, for greater splendor, arranged for the Procession to open up light-colored stick figures lined with paper or blanket, of enormous size, within which was a person manipulating them, representing different types of races, as a symbol of Jesus’ empire over humanity.

The idea was copied and transferred to ‘the walks of the groundhogs’ and the carts full of actors in colorful costumes, which since then were preceded by the “giants”, name with which the people designated the figures.

Nowadays, these giants and marmots are made of reed structure, are dressed in baggy clothes, and the head is made mostly with mache paper. Their dance is vertiginous in the turns, they almost lose verticality and their arms follow the inertia of the movement, both are always accompanied by the chords of a wind band.

This band goes along the street releasing its rumblings and melodic chords under the Oaxaca sky. The wind band was inherited from the French tradition and it is said that Oaxaca adopted this beautiful musical group since there are around five thousand wind bands in the state. The band will play throughout the Calenda, rain or shine, that doesn’t matter, because music is another fundamental aspect in these processions.

The beautiful women could not miss this; the Chinas Oaxaqueñas adorn the entourage with their baskets full with beautiful natural flowers on their heads. These girls are invited by the “Main Godmother”, which in turn was selected by the butler of the party. The godmother invites friends to join the party and her role is to dance and beautify the act with her beautiful floral arrangements loaded on her heads. These baskets are heavy and expensive; the party requires that waste of time and money. It is a must for this kind of procession.

The end of the Calenda is in the house of the butler, where a dinner is offered, accompanied by music, lots of beer and mezcal for all attendees.

This is another beautiful tradition rooted in Oaxaca; a procession that involves many aspects organized by devotees who, with great faith, celebrate their people, their Saint, their friends, relatives and even their enemies that cease to be after a good mezcal and a good piece to dance.

If living in your own skin this type of tradition is what moves you, on your next visit to ZOA [Hotel Secreto], you can escape a day or two to the city center to find one with beautiful Calenda in the Church of Santo Domingo, to feel the joy of this celebration with your whole family or that special person.

No comments to show.